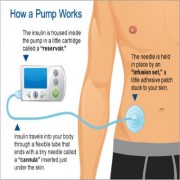 I have had Type-1 Diabetes for over 35 years. This means my pancreas produces no insulin, and I require daily external injections of insulin to survive.

I was quite healthy with the exception of being diabetic, and very active, playing tennis three to five times per week, and living an active life. My overall relative good health, and the fact that I had paid close attention to my diabetes over the years, played a significant role in qualifying for the transplant.  I had no serious health issues that might be aggravated by taking the immunosuppressant drugs required by transplant recipients.

My insulin requirements had grown during the most recent few years, as I developed a condition called insulin resistance, which means that I was slowly requiring more daily insulin to keep my diabetes under control. I needed about 60-65 units per day of fast acting insulin, depending on my carbohydrate intake.  I was a modest eater, but I was also about 15-20 pounds heavier than I had been in previous years, primarily due to my increased insulin requirements – an unfortunate side effect of insulin resistance.

How Does Type-1 Diabetes Develop?

Millions of people around the world live with Type-1 diabetes, a life-threatening autoimmune disease that strikes both children and adults. There is no way to prevent it, and at present, no cure.  The exact cause of Type-1 diabetes is unknown. In most people with Type-1 diabetes, the body’s own immune system — which normally fights harmful bacteria and viruses — mistakenly destroys the insulin-producing (islet) cells in the pancreas.

How is Type-1 Diabetes treated?

During the first few years I had diabetes, I used syringes to inject the daily insulin I require. For the past 15 years, I have been using an insulin pump for these injections.   I wear the pump on my belt or waistband and the insulin is injected through a very small catheter placed under the skin. I rotate the injection point around my abdomen every 3-4 days to avoid infection.

Every Type-1 Diabetic has challenges, including maintaining a healthy diet, taking the proper amount of insulin based on what you are eating, and often dealing with people’s misconceptions that Type-1 diabetes is somehow caused by personal behavior.  Type-1 Diabetes is a genetic disorder, and you have no control over who gets it or how it affects you.

Diabetic hypoglycemia – low blood sugar – is also part of being a Type-1 diabetic or being the spouse or friend of a Type-1.  We get low blood sugars because our body, illnesses, and emotions are unpredictable – and they can dramatically affect our blood sugar levels.

When we get a low blood sugar, it must be treated quickly, usually by ingesting some fast acting sugar – like orange juice or a sweet candy – or we can slip into severe hypoglycemia. Severe hypoglycemia has the potential to cause accidents, injuries, coma, and death.

It Was My Major Issue

Hypoglycemia unawareness was my bête noire, and my most severe diabetic problem.  I had, over the last 10-15 years, developed a pattern of hypoglycemia that I could neither predict or detect, and which frequently resulted in “severe hypoglycemic episodes” – some of which have come close to being fatal. My blood sugar levels would drop suddenly, without explanation, sometimes while driving, and sometimes while sleeping.

Diabetic hypoglycemia starts first with mild or rapid mental disorientation, and can, if not addressed quickly, lead to seizures and loss of consciousness, and sometimes death.  It has been a constant issue for me, and all of my family, friends, business acquaintances, and tennis partners have seen me experience some pretty bad low blood sugar episodes.  It is a trauma for the diabetic, and often a greater trauma for a spouse, family member, or friend.

NEXT: Hypoglycemia - For Family & Friends