I first contacted the City of Hope (COH), Duarte, California, in May, 2015, about their clinical trial that I had found on the internet. This video – from a patient in one of their earlier trials, several years ago – hit all my hot buttons, and convinced me that I wanted to find out more about what they were doing.

City of Hope was now in the middle of an entirely new phase using an evolutionary protocol called “T-Cell Depletion”. T-Cell depletion is a treatment designed to destroy T cells, which play an important role in immune response, prior and during the transplant procedure. The combination of T-Cell depletion and other anti-rejection drugs appears to offer the promise of longer term survival of transplanted islets – sometimes up to many years.

What are Pancreatic Islets?

Pancreatic Islets are clusters of cells in the pancreas that make insulin. In people with Type-1 diabetes, these islet cells have been destroyed, and you are required to take insulin daily to survive, either using injections by syringe or, in recent years, by the use of an insulin pump attached to their body. 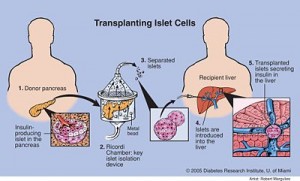 In pancreatic islet transplantation, cells are taken from a donor pancreas (from someone who has donated their pancreas after their death) and are transferred into the diabetic recipient. Once implanted, the new islets begin to make and release insulin. Researchers hope that islet transplantation will help people with type 1 diabetes live without daily injections of insulin. Here is a good description of the procedure:

Historically, islet transplants had been only marginally successful, since the body’s immune system attacks the islets just like any other foreign body, and eventually destroys them, usually within a few months. Immunosuppression drugs are needed to keep the transplanted islets functioning. Researchers do not fully know what long-term effects these drugs may have.

The team at the City of Hope has one simple objective – to eliminate and cure Type-1 Diabetes.

My personal team would consist of multiple doctors, nurses, psychologists, endocrinologists, and administrators, plus the surgeons who would do the actual transplant operation.  They all began educating me on all aspects of what would be happening over the upcoming months, and what might happen at every stage of the process, preparing me, physically and emotionally, for both success and/or failure.  It was during this time that I began to realize the breadth of experience represented by these people, and the overall expertise available at the City of Hope.   They were, in short, all quite extraordinary professionals, and I began to develop a confidence in them and the entire organization.

What They Told Me I Could Expect with a Successful Transplant

They told me I could potentially expect the following with a successful transplant:

They also cautioned me about the following:

No one makes a decision for a transplant without a great deal of thought and reflection.  For me, however, it seemed a reasonable decision, for these reasons:

A “no-brainer”, in other words.  I wanted to move forward.

The eligibility requirements were a bit daunting – I was close to the maximum age, and close to the maximum physical size (I was 6’3”, 230 lbs), but I was also quite healthy with the exception of my diabetic issues. My severe diabetic hypoglycemia episodes, that I could not detect, qualified me for the program, as long as I could meet all other physical requirements. The most concerning was the Body Mass Index (BMI) requirement – at 230 lbs, I was right on the edge.

They began a process of intensive and continual medical tests over 5 months.  I was approved in early December 2015 for the Islet Transplant. I was put on the national Transplant Recipient Registry on December 22, 2015, with the hope of finding a donor sometime in the next few months.

However, to everyone’s surprise, particularly mine, on December 31, 2015, at 6PM, I was notified by the COH that a potential matching donor pancreas (from which to extract the islets) was available, and to report at 5AM New Years Day for potential surgery – depending on the health of the donor islets. I had the transplant early in the morning, January 1, 2016.