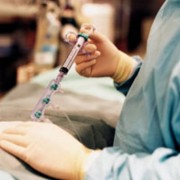 The Islet Transplant surgery was about a one and a half hour procedure. I was awake throughout the entire process, under a mild sedative. 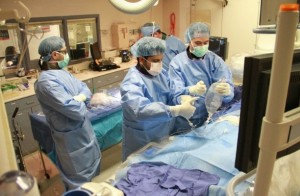 Islets were inserted into the portal vein of my liver (entry was made slightly below my right armpit toward the back), and the injected islets immediately started producing insulin. The concept is that these cells then propagate themselves throughout the liver, “grafting” to tissue while they acclimate themselves to my “environment”. They are supposed to become more productive as this grafting process continues.

I went directly from the procedure into Intensive Care for 5 days. They had destroyed all my T-Cells, and reduced my white blood cells to practically nothing, before and during the procedure, to prevent initial rejection. The primary drug used to do this was Anti-thymocyte Globulin (ATG), which was given to me several times, in six hour doses, over the course of the next 5 days.

Because of the reduction of T-Cells and the suppression of my overall immune system, I was very susceptible to infections of any kind, like any organ transplant recipient. Anyone in Intensive Care treating me, the doctors I saw every day, plus anyone visiting me, had to take additional protective measures – wearing protective masks, etc. I was also given a variety of additional drugs, with blood tests every two hours – even overnight – to make sure they were working.

These drugs – particularly ATG – can have a variety of side effects, including severe nausea and vomiting, but other than one short two hour period the first day, I got through all sessions without a serious issue, which was quite unusual. In general, since the transplant, I have had little in the way of side effects or complications, again quite unusual, but a real blessing, for which I am very grateful.

Before I was discharged from the hospital, I was given a thorough briefing on my current status, and how the transplanted islets were performing.  My daily insulin requirements had gone down to less than 20 units per day, from a pre-surgery level of over 60, showing that the islets were working, but perhaps not fully so, as they expected the islets to further “graft” and perhaps become more productive over the next 1-2 months.

I was also given intensive guidance and supplies for my immediate home health care, which I would be doing myself.  This included: